Why Are My Strings Breaking

Why are my strings breaking?

If you’re breaking strings, it can seem like the bane of your life at times. It’s never a convenient time to break a string, especially mid gig. Plus if it’s happening all the time it can be an almighty pain in the proverbial. But why do strings break? Is it poor technique? Could it be a duff set? Perhaps….but sometimes there can be other reasons we’re not aware of.

We all have our own style of playing. Some of us may be more aggressive players than others and attack the guitar with a little bit more gusto, this in turn could make our strings more prone to breaking. Whilst this may be a contributing factor, we certainly wouldn’t suggest changing your technique just yet, there are some other more controllable factors to consider first. But, whilst we cannot eliminate the possibility of a string ever breaking, there are a few things can we look at to help prevent the likelihood of them doing so in future. Let’s take a look….

How old are your strings?

Old strings (particularly if they haven’t been cleaned regularly after playing) can fall victim to all kinds of dirt and acidic sweat from your fingers. It’s always recommended to wipe down your strings after playing as the sweat and oils will sit on them and penetrate the windings causing them to oxidise. Consequently, this will have a detrimental effect on their lifespan and durability (not to mention their tone) making them more liable to breakage.
If this sounds a bit too much of a hassle, it may be worth considering a coated guitar string. Coated strings have a microscopically thin liquid polymer applied to the outside surface of the string, preventing sweat and oils from corroding the outer winding, thus extending their lifespan.

String breakage usually occurs when it encounters something sharp, commonly a burr on another metal surface. Over time our guitars can develop sharp points which, whilst at first glance don’t appear too much of an issue, they can act like a razor blade to something like a guitar string so it’s worth checking all the potential snapping points where the string makes contact with the guitar; 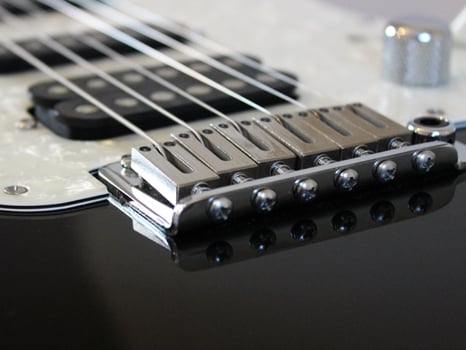 Bridge saddles are one of the prime locations for string breakage. Some saddles can be a little too sharp. As the strings move back and forth, they apply a huge amount of downward pressure on the saddles and over time they can ‘dig’ in creating sharp edges which in turn can cause string breakage. If you sense a sharp bridge saddle could be the main offender, take a very fine piece of sandpaper or file and (lightly!) smooth off the rough edge to help create a smooth surface for the string to pass over.

A correctly fitted nut is imperative in contributing towards the quality of a guitar’s playability and tone. A poorly cut or shaped nut can cause a whole host of issues and one of the keys to it being effective is that there is little friction in the slots. Any friction on the nut can cause the string to ‘hang up,’ stretch and snap. Throughout a top nut’s life, it will experience a lot of wear as the strings move about inside it’s slots through tuning, bending and (if your guitar has one) tremolo use. Much like the bridge saddles, all this movement can cause wear on the nut which again create sharp edges and potential areas for strings to snap. Over time dirt can also build up in a nut’s slots increasing the chance of the string binding, causing it to stretch and snap. When you restring your guitar, always try to clean the nut of any dust or debris and consider adding in some lubricant too. 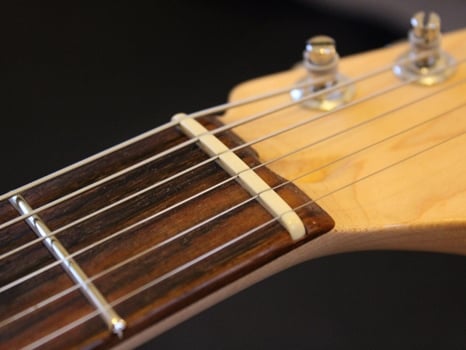 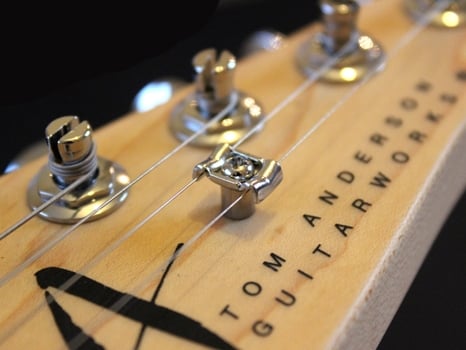 Another potential friction point could be the string trees. Much like the nut and saddles the string trees should also be checked for sharp edges or burrs and if there is anything suspect, it should be carefully polished to a nice smooth edge, again with some fine sandpaper. In addition, a dab of lubricant can be applied to the underside of the string trees to create a nice smooth surface for the strings to glide across.

Small burrs can also occur on the edges of the holes of your machineheads. It’s always worth checking the inside of the hole and outside of the post to ensure the string is sitting against a nice smooth surface. If you do encounter a suspect edge or burr, you can smooth this out again with a fine piece of sandpaper. The machineheads are another point where there is a huge amount of tension on the string so always be sure you are fitting your strings correctly too. If your strings are fitted incorrectly, it could put unnecessary tension on the string. 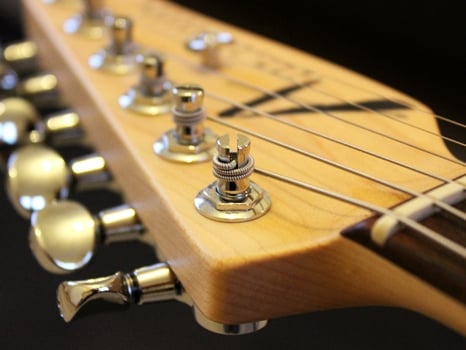 There are a few dedicated lubricants for guitar parts on the market such as Big Bends Nut Sauce or Planet Waves Lubrikit that when applied to your nut, bridge or string trees, allow the strings to move more freely and smoothly. Other effective lubricants you could use are pencil lead, powdered graphite or something like vaseline will do the trick too.

You really want as little resistance as possible at these points. If the string ‘hangs up’ it will cause it to stretch unnecessarily and increase the likelihood of it snapping.

Graph Tech produce man made ivory guitar parts making them very consistent from piece to piece and it’s very rare you get any kind of string binding with the Graph Tech parts. Their TUSQ XL range is treated with PTFT making it self-lubricating and super slippery so no need to add lubricant into the slots. You only need to refer to the Graph Tech website to see how many manufacturers believe in the quality of their products.

Using the wrong strings for what you need

One less obvious reason why your strings could be breaking is simply by using the wrong strings for how your guitar is set up. For example, if the gauge you are using is not suitable for the pitch you have the string at, it will be subject to greater stress and inevitably making it more susceptible to breakage.

For players of round core strings it may be worth noting that sometimes the outer winding can come unwound from it’s inner core causing it to slip. This is why often people complain of round core strings sounding dead after fitting them. To avoid this we’d always recommend trimming the strings after you have strung them, tuned up and played them in for a bit. Although this technically isn’t the string breaking, it certainly can render them unplayable. For bassists or players who have vintage tuners (as in the image above) they often need to trim the string before poking the end down the tuner’s centre hole. Trimming will increase the likelihood of slipping so if you do need to cut the string one tip to avoid the core slipping is to bend the string first at a right angle about an inch before the point you are intending to trim the string. Once the bend is made you can then cut the string beyond this point without the risk of it slipping.

Another unusual (but definitely possible) reason for string breakage could be a sharp fret. Any dent or mark on a fret could be enough to break the string. For instance, you may have knocked your guitar at some stage which may have created a sharp area. Whilst less likely, it’s worth checking out just in case.

People who tend to use heavier picks like them as they allow you to ‘dig in’ to the strings a bit more, giving more tone. A thicker pick will naturally exert greater force and increase the energy transfer onto the strings therefore (you guessed it!) increasing the possibility of string breakage. But, please don’t let this deter you from using heavy plectrums though…many players like the feel of a heavy pick and it’s one of the least likely factors to affect your strings.

What? Is there such a thing? Well yes…If you really wanted to go ‘belt and braces’ you may want to consider investing in some break resistant strings. This is a relatively new concept developed by two of the biggest string manufacturers in the world today…the Ernie Ball Paradigm and D’Addario NYXLsets are the two of the most popular ranges to consider. Both sets are made with their own high strength steel core making them more resistant to breakage. The stronger core also prevents early fatigue building up in the string allowing it to maintain it’s tensile strength even after hours of playing and abuse.

We hope this has given you some insight into why your strings can break. If you are still experiencing some issues please do not hesitate to get in touch and we will always be happy to offer advice where we can.